Przejdź do treści
At night 17/18 of May 1944, Feliks Konarski – one of the soldiers of the Polish army stationing at Monte Cassino in Italy planning an attack during key battle – wrote two stanzas of one of the most important Polish songs – not only of the wartime – but in the history of Poland called Red Poppies on Monte Cassino. The second soldier, Alfred Schütz, the same night composed the music. After winning the battle, in which a total of 923 Polish soldiers were killed and 2931 wounded, was written the third stanza. The last one Konarski wrote 25 years later.

Song was immediately picked up by fighting soldiers. Soon after the battle musical scores for the piano was published in Italy and in August Polish weekly paper from New York published notes and lyrics of the Red Poppies. First scores published in Poland appeared approx. in 1947, but soon after the song was censored. Notes were not available, the public performance was in practice prohibited. Then the song of Red Poppies on Monte Cassino became an unofficial anthem of opposition circles – for the entire duration of the communist regime. Forbidden memory of Polish independence. It was customary that when the band performed this song, the audience stood at attention.

***
Alfred Schütz was born in Ternopil in 1910. He studied law in Lviv, worked in a bank. He was active in the university theater and composed music for the popular radio program. During the war he went to the Polish army in exile (Anders’ Army), with which – along with Feliks Konarski – arrived at Italy. After the war he emigrated to Brazil, in 1961 years lived in Munich, where he died on October 1, 1999.
He died almost completely forgotten, to the last days taking care of sick wife, being in a very difficult financial situation. So difficult that without organized during Culture Days of Polish Catholic Mission in Germany collection, the widow would not even have money for a funeral. She was ready to bury her husband in an anonymous grave – without a nameboard, only with the number. Finally the composer came to rest in the cemetery Ostfriedhof, Street St. Martin, quarter166a.
***

„I wrote in my life over two thousand songs. Among them were funny and sentimental, with sense and without it, good and bad, valuable and bland. Some of them day-to-day became popular – other passed away unnoticed… only one could so quickly break all existing world barriers and boundaries and connect Poles scattered far corners of the earth – Red poppies on Monte Cassino.”
– Feliks Konarski

Lech Makowiecki, Polish singer, depicted with details on his blog his fight for the possibility of legal use of Red Poppies for a passage in one of his songs. The battle consisted mainly of an attempt to identify – who has the rights to the music, as Alfred Schütz died in 1999, and his wife – the only heir – five years later. A lawyer working with Lech Makowiecki managed to make contact with a law firm in Munich, which was authorized to manage the property rights. But it was not the owner.

However, this was sufficient reason for the law firm to collect royalties for the use of this patriotic song. This fact received wide coverage in the Polish media. Here – royalties for the performance of the unofficical Polish national anthem, written during the bloody battles with the German army occupying almost the whole Europe – goes to Germany.
Royalties for the performances have to pay anyone who does not use the work under fair use,  this includes military bands, but also the Alexandrov Ensemble which concerts all over the world and has Red Poppies in its repertoire. Royalties have to be paid by any producer of radio or television program about the phenomenon of this song.
But who get royalties, if Alfred Schutz and his wife Veronika were dead? I have found the answer to this question. Art. 1936 of the German Civil Code (BGB) provides that if the deceased did not leave any heirs, all assets are inherited by the land, on which territory deceased last resided. In this case, it is Free State of Bavaria. And in this case it is not only a theoretical situation, but the existing legal status certified by the following court decision: 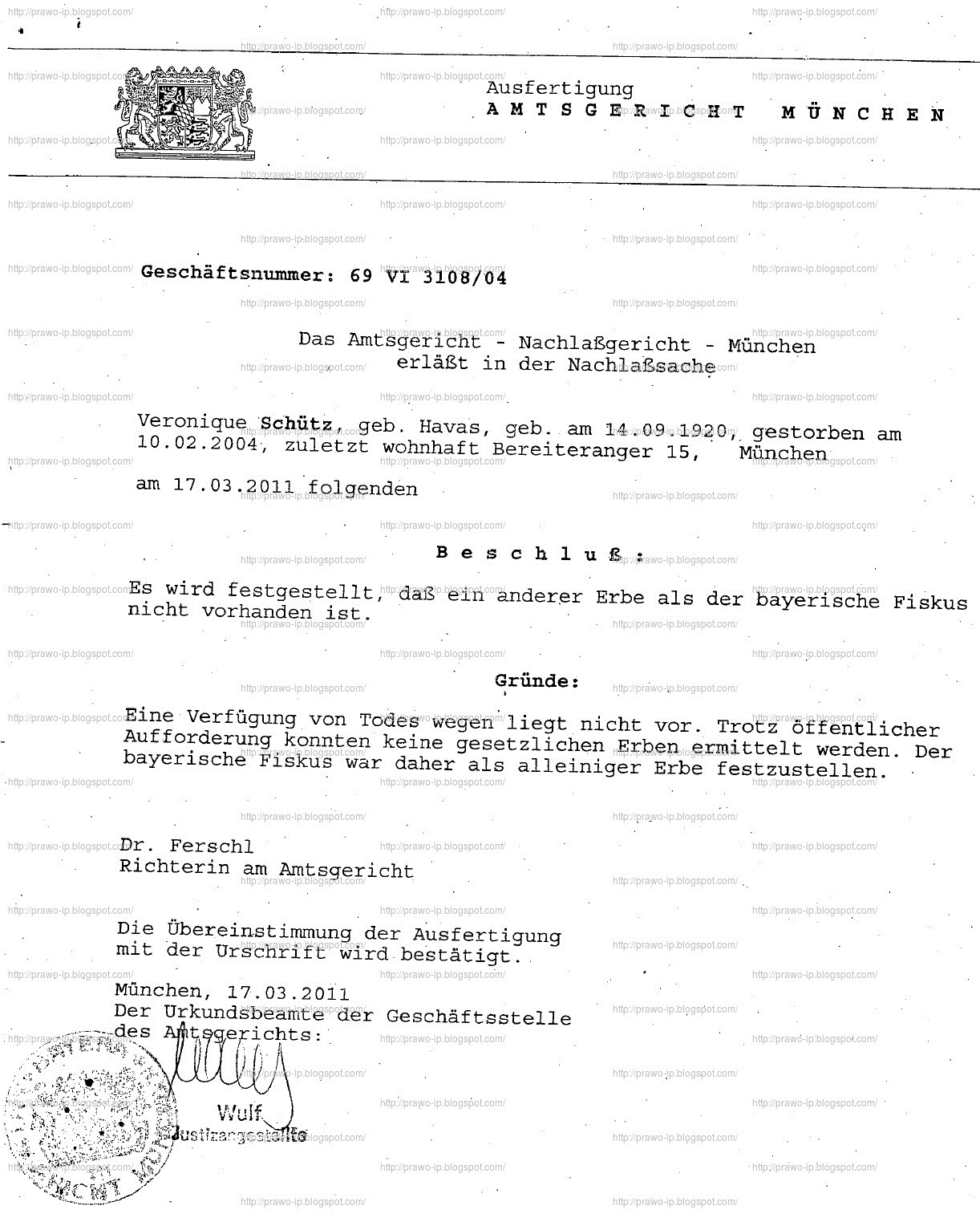 According to the Munich court March 17, 2011 it is stated that in the absence of heirs of Alfred Schutz wife, all estate is passed to Bavaria. Including the copyright to the tune of Red Poppies.

***
In May 2014 I published the story of my search for the owner of the Red Poppies and invited to cooperation all interested in acqiring those rights by Polish entity and then releasing it into the public domain. The case found its echo in the media, many people expressed their support for the cause. I started cooperation with the Polish Songs Library in Krakow – archiving and digitizating Polish musical works – which sent an official letter to the authorities of Bavaria and proposed redemption of the  rights. However, despite first contact, correspondence has stuck in Bavarian administration and for many months remains unanswered.
After all, I am counting on the positive outcome. However, this case demonstrates a broader problem of the modern copyright law and the long duration of copyright protection which may cover also the works, which are invaluable testimonies of culture and history, and during decades of such protection – paradoxically independently of the will of the creator, as well as the rights holder – its ownership may change suprisingly.

„In the world of copyright are known instances where one successful song was able to secure an author for all his further life. Red Poppies did not give me that security – but it gave me a hundred times more. Popularized my humble name – and have themselves become Rosemaries [popular Polish patriotic song of WWI] of the World War II.
Does credit for this go to me?… Probably not. „Red Poppies” are closely related to the heroic deed  of Polish soldier, with one of the most violent and romantic battles fought by him and last as long as lasts memory of this deed, and all those who died at the foot of the monastery mountain true in their service… In the service for the Poland.”
– Feliks Konarski

***
Feliks Konarski quotes in the text translated after: „Red Poppies”, Nasz Dziennik, 18 May 2005.
Author is a Polish lawyer, supporting entrepeneurs and companies conducting business in Poland, mainly in real estate and intellectual property.
***
NOTE ADDED ON SEPTEMBER 29, 2015
***
Over a year ago I published an article about post-war life of Alfred Schutz, Polish composer of „Red poppies on the Monte Cassino” melody – as well as history of the  copyright to the song. I found out who is the current owner of the rights, which turned out to be German state of Bavaria. The case found its echo in the media, many people expressed their support for the cause. I started cooperation with the Polish Songs Library in Krakow. Together we sent an official letter to the authorities of Bavaria and proposed redemption of the rights.
After several months of silence we got positive feedback from Bavarian administration in February 2015. Despite the pre-announced success there have been some difficulties of political-administrative nature, which delayed the outcome for another several months, on September 14th, 2015, Polish Foreign Ministry published joyful announcement that an agreement transferring the copyright to the melody was signed.
The agreement was signed in Consulate General of the Republic of Poland in Munich by authorized representatives of both states: 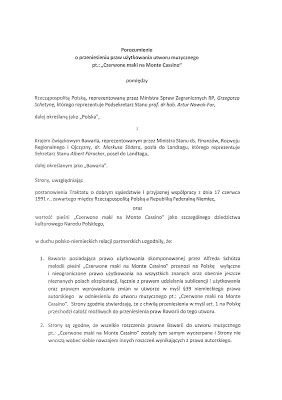 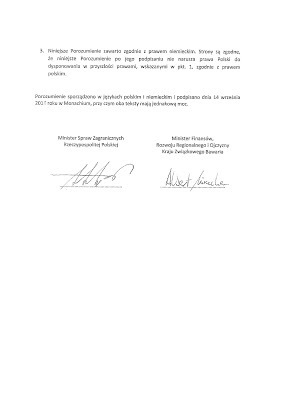